SunVest® is one of the largest vertically integrated developers of distributed solar projects in the United States.

What are Solar Panels Made Of, and How Are They Made?

Solar energy is the world’s cheapest and most abundant energy source. For that reason and others, it’s becoming increasingly popular for commercial and residential use. But before adopting the new technology, you might be wondering: What’s inside solar panels that makes generating electricity possible? We previously dove into the process of how solar panels work, but what are the components and materials inside solar panels?

How Solar Panels are Made

Solar panels are made of silicon, metal, glass, and a few wires. the most important part is solar cells, which are comprised mostly of silicon and small amounts of other elements, including phosphorous, boron or gallium., They convert the sunlight into usable energy.

Cells begin by melting silicon at very high purity. Specialized machines turn that molten silicon into a cylindrical-shaped crystal called an ingot. Phosphorus and boron are added to the silicon ingot, giving it the ability to conduct electricity. Very thin sheets are cut from the silicon ingot to produce silicon wafers, which are then lined with conductive wires to form cells, which are arranged onto solar modules.

The cells are wired together and placed between a protective metal backsheet and an anti-reflective, protective glass layer. A metal frame is sealed around the panel to keep all the layers together. After assembly, a junction box is installed to protect the electrical wires in the solar panel from getting damaged. Finally, tests are run on the solar panel for quality and strength before it’s shipped out and installed. 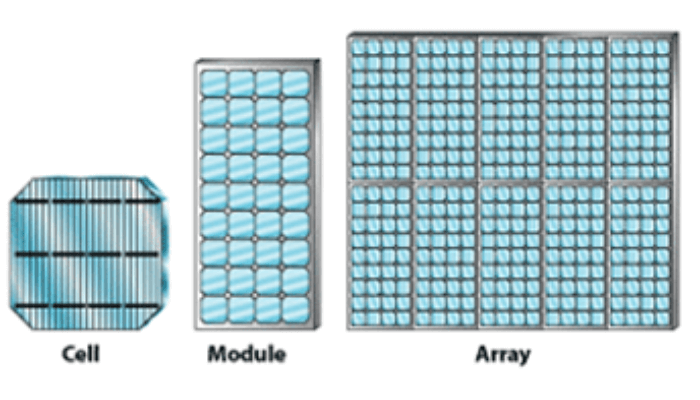 Photo caption: Cells are arranged onto modules (commonly known as solar panels), which are then installed in larger numbers as an array (which are referred to in the industry as a solar project or solar installation). Credit: Wikimedia Commons.

When sunlight strikes a solar cell, the photons knock free electrons from atoms, creating a flow of direct current (DC) electricity. Tens, hundreds or even tens of thousands of solar panels can be wired together at a project, uniting that flow of electricity into a torrent. The electricity is then converted into usable alternating current (AC) with an inverter and used on-site or fed into the electric grid.

Solar Power at Your Site

When considering the adoption of solar power, it’s important to understand the functionality and inner workings of solar panels to make an informed decision. Thanks to innovation and incentives in the renewable energy sector, we can utilize the sun’s abundant, clean energy source to power our everyday lives. The SunVest team can work with you to understand which modules are available and work for your particular site.