SunVest® is one of the largest vertically integrated developers of distributed solar projects in the United States.

How Do Solar Panels Work?

Solar energy is one of the most abundant resources on Earth. To better paint the picture, at any given moment roughly 173,000 terawatts of solar energy is intercepted by Earth. In comparison, that’s more than 10,000 times the world’s total energy usage.1 By capturing the sun’s energy and converting it into electricity to power cities and communities, we can cut down on carbon emissions for the planet and save some money in return.

Solar photovoltaic (PV) panels transform sunlight into usable electricity through smaller units called solar cells. Frequently, these cells are made from silicon, which is a great semiconductor to help maintain the imbalance of the positive and negative charge of an electric field. Silicon is derived from Silica, one of the most plentiful minerals on the planet.

When the sun shines, energy is released as tiny particles called photons. When these photons are absorbed by the solar cells, it knocks loose several electrons in the negative silicon layer that are then free to drift throughout the cell. The P/N junction forces the free-flowing electrons towards the conductive metal plates that line the cell’s outer layer. This flow creates an energy current that is then sent through an external circuit generating electricity.

Each silicon cell produces a small amount of energy, but when placed together in large modules, you can generate lots of energy, creating the solar panels we know today. 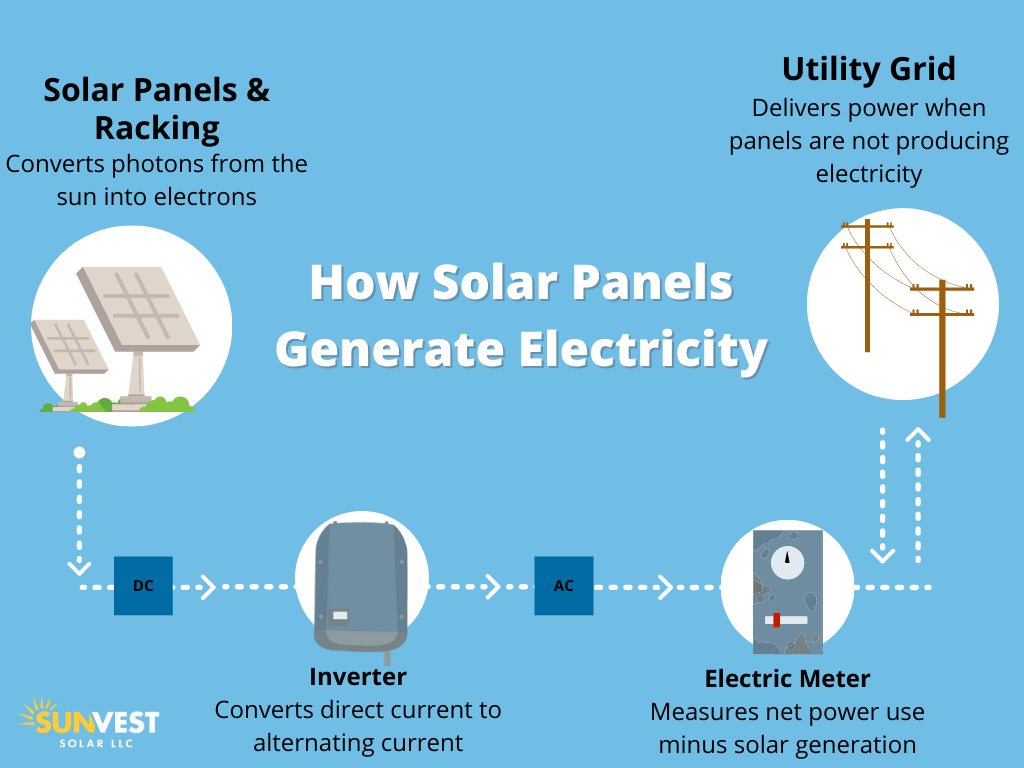 With the electricity produced in the circuit, PV solar panels generate direct current (DC) electricity. With DC electricity, electrons flow in one direction from the negative side and return to the positive side. The DC electricity is then sent to an inverter to be converted to AC power to use throughout the U.S.’s power grid system. Solar inverters match the voltage and phase of the electrical interconnection point. These inverters are the powerhouse of this electric system; not only do they invert the power for our use, but they also provide ground fault protection and system tracking to make sure each solar panel is performing at its maximum potential.

Not surprisingly, weather can impact how much solar power a solar system produces, but not in the way you might think. Colder weather can actually be more efficient than warm, sunny weather because the cool temperatures allow the panel to generate more voltage and produce more electricity instead of “cooling down.”


Opposingly, warmer climates tend to have sunnier weather and fewer clouds throughout the year. For these reasons, the sun is out more and longer so more sunlight can be captured and generated in return.

No matter where you reside, solar energy is a great investment, both for your pocket and the environment. The amount you could save depends on a few factors such as the cost of electricity, solar incentives available in your state, net metering, and the quality of your solar panels. No matter your solar production goals, SunVest will design a solar system unique to your individual needs.

1 Science on a Sphere